Osseo’s free Tuesday Music and Movies in the Park events return in 2019 with a special star-spangled lineup. All concerts start at 7:00 pm, with movies at dusk.

Crowd- and kid-favorite the Teddy Bear Band kicks off the 2019 season on June 11. On June 18, join Osseo residents in the band Led Penny for classic rock. June 25th is an opportunity to relax with the retplies from Snake Discovery at 7 pm before seeing the new movie, Mary Poppins Returns, at dusk.

Following a break for Independence Day week, the series resumes on July 9 with The Classic Big Band and The Nostalgics. On July 16, the Zoomobile zooms into Osseo, followed by the film A Dog’s Way Home.

Country band Darlene and The Boys plays on July 23. On July 30, join us for an audience-selected Superhero Movie, Bumblebee (PG-13).

The series breaks for Night to Unite on August 6, and resumes with a 7:00 performance from Osseo’s Spark Music Studio students and animated film Coco at dusk. Minnesota’s biggest Big Band, the Capri Big Band, makes a return visit to Osseo on August 20, and the season ends with an Animated Movie selected by audience members, How to Train Your Dragon 3: The Hidden World on August 27.

New this year, food trucks will be invited to participate in the events, so stop by for dinner along with your music or movie. Local nonprofit groups will again sell concessions at the Tuesday events. (Interested groups and food truck vendors should contact City Hall.)

Visit www.discoverosseo.com for the latest information. Weather-related rescheduling will be announced on the city’s Social Media pages: on Facebook at Discover Osseo and Twitter @CityofOsseo. 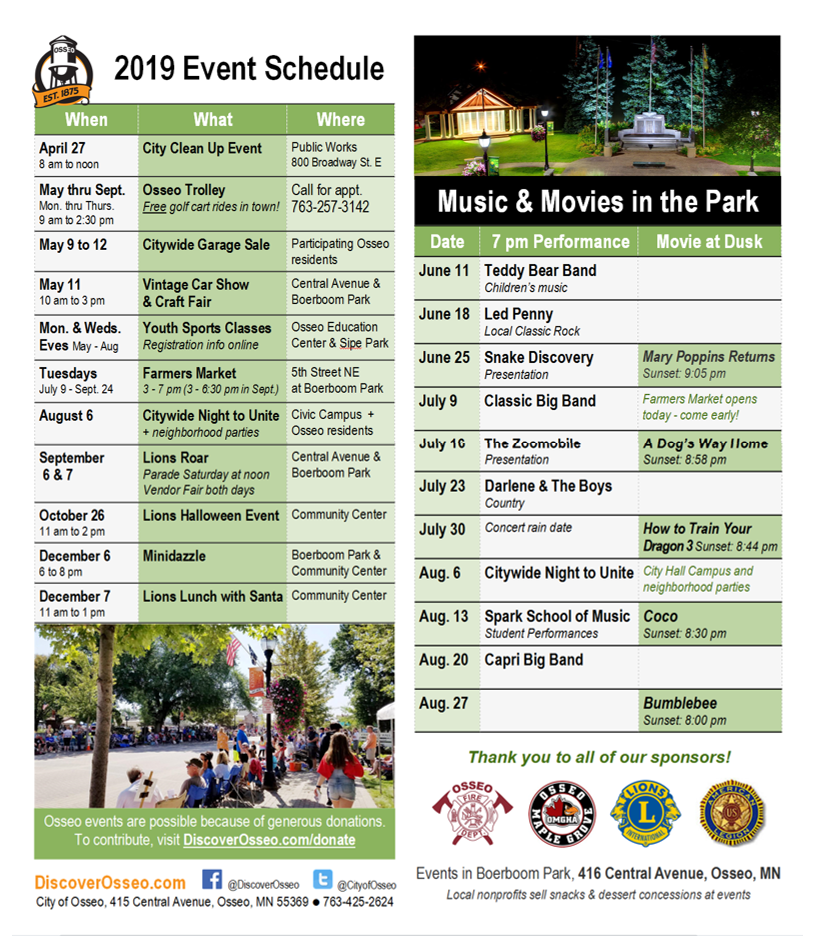 This entry was posted in City of Osseo Events, City of Osseo News and tagged Movies and Music, Movies And Music In The Park. Bookmark the permalink.